Blogspot was being wonky yesterday so no bloggage.  Today I tried a different browser and voila!  Aggravating that it works only sometimes.  But it's a free service so I can't complain too much.  Although I just did.

Beauty is on day three of Flagyl, which is an antibiotic.  She's also getting anti-nausea medication, which seems to be helping as she is mostly holding down food.  She is, however, afflicted with the most horrendous farts.  Ever.  I keep checking to see if somebody has taken a massive dump, but no.  It's all gaseous.  Even she doesn't want to be around those farts.  Today she came into the dining room, farted, and left.

And she's a silent farter so I don't even have any advance warning.  I'm just sitting here, in my own little world, and then OH MY GOD I start to suffocate in a putrid, invisible cloud of nastiness.  I love that dog but if it were a little warmer out she'd be spending a *lot* more time outside.

It snowed last night, and it rained, and it sleeted, and it thundered and flashed blue light and generally was a comprehensive display of winter weather possibilities.  This morning I checked my email (from bed, as I finally remembered to bring my phone upstairs with me) and saw that work had a delayed opening.  11 am.  That's the latest I've seen it, in the last seventeen or so years.  Not counting days where they shut work down entirely.

JD and I shoveled this morning, and that snow was super heavy.  It's about as soaked as snow can get and not be actual liquid.  It felt fine while I was shoveling but now my neck is tweaked because hello I'm forty.  At least it's not my lower back tweaked.  Necks are involved in fewer movements than lower backs.

Afte the shoveling I decided that telecommuting the rest of the day was a good option, so that's what I did.  And so I was at home when I got the news that pipes were leaking into various offices.   My poor boss was there on his own and he got to deal with it.  There's an incipient leak in my own personal office, directly over an electrical outlet.  I hope some plumber fixes it before the bulging ceiling tile gives up the fight.

At lunchtime, even though I was telecommuting, I went out.  Because it's lunch date day, that's why.  JD and I went to Five Guys, which is within spitting distance of work.  Kind of an odd feeling.  And there I got a "little hamburger" and split an order of fries with JD.  Oh goodness.  That hit the spot.  Also I determined that I am off my diet until Monday because tomorrow is the start of the Mother Ruck, and that is an eating occasion.

Throwing all caution to the winds I ate several Hershey's kisses, and then I made brownies for the Ruck and ate some of the ones that didn't come out nicely.

I made a crustless quiche for the Ruck, which I hope is good.  It looks good: 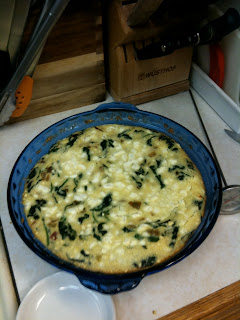 With us home all day I got to see the various kittens rampaging around.

I'll be busy rucking all weekend so no bloggage for me on Friday or Saturday.  Probably.
Posted by Mrs. Joy at 9:03 PM